gatsby-transformer-remark empowers developers to translate Markdown into HTML to be consumed via Gatsby’s GraphQL API. Blogs and other content based sites can highly benefit from functionality enabled with this plugin. With this plugin, authors of content for the site don’t need to worry about how the site is written or structured but can rather focus on writing engaging posts and content!

In certain instances, a developer may want to customize the content of the Markdown file and extend it functionally in useful ways; for example, use cases such as adding syntax highlighting, parsing and creating responsive images, embedding videos, and many others. In each of these examples, a plugin will be injected with the Markdown Abstract Syntax Tree (AST) and manipulate content based on certain node types or content in particular nodes.

What you will learn in this tutorial

There a few things that you should have some understanding with:

To get an understanding at what is available in the Markdown AST, take a look at the Markdown AST spec that is used in remark and other unist projects: syntax-tree/mdast.

Starting out with a Markdown file as below:

Remark would translate this into an AST made available to gatsby-transformer-remark plugins. The AST would appear as the following:

As well, AST Explorer is a site that gives you a side-by-side view of the markdown and the outputted AST.

Setting up a plugin

You are going to create a plugin that colors all top-level headings in the markdown with the color purple.

First create a local plugin by adding a plugins folder in your site and generating a package.json file for it. As well, create an index.js file. In this file, we export a function that will be invoked by gatsby-transformer-remark:

The first parameter is all of the default properties that can be used in plugins (actions, store, getNodes, schema, etc.) plus a couple just for gatsby-transformer-remark plugins. The most relevant field for our purposes is the markdownAST field which is destructured in the code snippet above.

As with other Gatsby plugins, the 2nd parameter is the pluginOptions which is obtained from the definition in gatsby-config.js file.

Finally, the function will return the markdownAST after the fields you wish to be edited are transformed.

Adding the plugin to your site

You likely will want to grab gatsby-source-filesystem to inject the file nodes into Gatsby’s GraphQL schema. In this example it is assumed that the Markdown files exist in a src/data/ directory.

If you want to add some options, you could switch to the object syntax:

In case you use gatsby-plugin-mdx in place of gatsby-transformer-remark, the former takes an array config option named gatsbyRemarkPlugins that allows compatibility with Gatsby’s remark plugins.

To make gatsby-plugin-mdx recognize a local plugin like gatsby-remark-purple-headers, you need to point to its location in the project through require.resolve.

However, if the sub-plugin is published and installed via npm, simply refer to it by name as the case with using gatsby-transformer-remark.

When modifying nodes, you’ll want to walk the tree and then implement new functionality on specific nodes.

A node module to help with is unist-util-visit, a walker for unist nodes. For reference, Unist (Unified Syntax Tree) is a standard for Markdown syntax trees and parsers that include well known parsers in the Gatsby world like Remark and MDX.

As an example from unist-util-visit’s README file, it allows for an interface to visit particular nodes based on a particular type:

Here, it finds all text nodes and will console.log the nodes. The second argument can be replaced with any type described in Unist’s Markdown AST (mdast) specification including types such as paragraph, blockquote, link, image or in our usecase, heading.

With this technique in mind, you can similarly traverse the AST from your plugin and add additional functionality, like so:

Next, by visiting all heading nodes and passing them into a transformer function, you can manipulate the particular nodes to match your use case.

Looking again at the AST node for heading:

With the inner function of the visit call, you parse out all of the text and if it will map to a h1, you set the type of the node to html and set the node’s value to be some custom HTML.

A small library mdast-util-to-string by Unified was used to extract the plain text of the inner nodes. This would remove links or other types of nodes inside the heading, but given you have full access to the markdown AST, you can modify it however you wish.

Gatsby supports the usage of asynchronous behavior in plugins, and gatsby-transformer-remark uses unified under the hood. The following example shows how the gatsby-remark-purple-headers transformer can be converted to asynchronous by adding the async keyword to the function declaration.

A real-world example of this would be gatsby-remark-responsive-iframe.

At this point, our plugin is now ready to be used. To see the resulting functionality, it is helpful to re-visit Part 7 of the Gatsby Tutorial to programmatically create pages from Markdown data. Once this is set up, you can examine that your plugin works as seen below based on the markdown you wrote earlier. 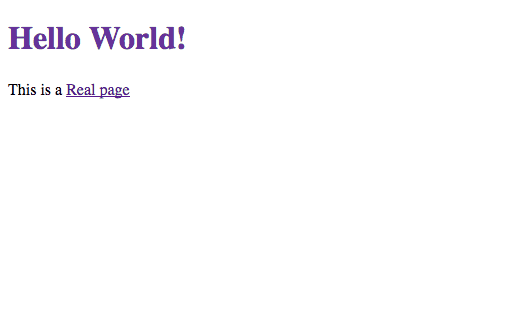 Note: In case you don’t see the intended effect, try wiping out the cache by running gatsby clean.

To share this plugin with others, you can extract the plugin to its own directory outside of this site and then publish it to npm so it can be accessed both on npm and Submitted to the Plugin Library.

You just wrote a local Gatsby plugin that is a sub-plugin for gatsby-transformer-remark that manipulates the Remark AST. You should now have a further understanding about the structure of Markdown Abstract Syntax Trees! Yay!

If you wish to see other plugins that manipulate the Remark AST, you can find them in the plugin library.