An improvement to build speed for sites with many (10k+) markdown and images was made in this PR #28891. This change especially benefits very large sites—our 16k page markdown/image benchmark site’s build time dropped 37% and the 128k pages benchmark dropped 84%.

In #28957 an improvement to gatsby develop was made by not using the debug config for bluebird. This can speed your source nodes, especially for sites with larger numbers of pages.

Support for Gatsby’s fragments in GraphiQL

The underlying graphiql package added support for registering fragments and Gatsby now leverages this new feature! You now get auto-completion for image fragments and any fragments that you added yourself inside GraphiQL: 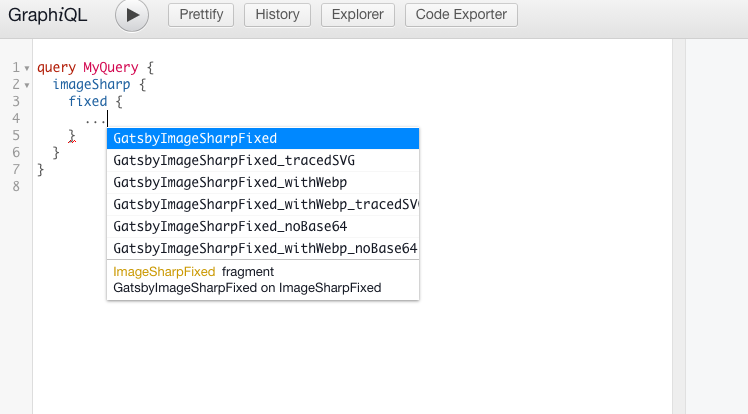 With the PRs #28689 & #28930 merged, Gatsby will now automatically use Fast Refresh if you use React >= 17.0.0 for your site. As you can read in the release notes for 2.28 we’ve added support for Fast Refresh giving you a better (and custom) error overlay, quicker error recovery and in general a better gatsby develop experience.

Two ESLint rules that will warn you against anti-patterns in your code were added now:

Please give us your feedback about the Fast Refresh integration in the umbrella issue. Thanks!

This release includes important changes to the API of the beta image plugin as well as some new features and some proper docs. These are breaking changes, but should be the final API used in the stable release.

We’ve listened to lots of feedback, we’ve used the components ourselves, and we’ve performed lots of tests. From that we’ve made a few changes.

This is likely to be the final minor version before the stable release, but please continue to share your feedback. Meanwhile, watch out for @laurieontech sharing the new image experience in Gatsby at Image Ready v2, hosted by Jamstack Toronto, alongside her counterparts from 11ty and NextJS.