We’re adding a built-in way for automatic TypeScript type generation and better GraphQL IntelliSense in Gatsby. If you’ve used gatsby-plugin-typegen or gatsby-plugin-ts in the past you’ll be familiar with this feature and we really value your feedback on this feature!

Here’s a short video of what you’ll be able to do:

As noted already, this feature is still experimental and the API surface might change until the feature is in general availability. Please give us your feedback in the RFC: GraphQL Typegen discussion after you have tried it out.

Then inside your pages you can access the global namespace Queries to get your type information. Make sure that your queries have a name!

The project graphql-typegen-testing shows all this if you want to get started quickly.

The video shown above gives autocompletion for your queries. This is achieved by using VSCode, the GraphQL Plugin, and defining a graphql.config.js with the following contents:

We intend to document as many ways to use a GraphQL language server to benefits from this information, so we’d also love your input here.

Previously, Gatsby preloaded a large amount of JavaScript and JSON assets which may lead to Network Congestion, especially for large sites with a lot of split chunks. This didn’t allow images and fonts to load as early as possible.

With this release we changed Gatsby’s behavior and now lazily load non-essential scripts and assets. You can see a before and after of two waterfall diagrams on gatsbyjs.com here:

In total this lead to a 50% improvement in loading speed for gatsbyjs.com which you can see in this short video:

The website finished loading after 1.2s compared 2.2s on previous Gatsby versions. This is achieved by using the improvements in Gatsby’s core, gatsby-plugin-gatsby-cloud’s default settings, and Gatsby Cloud.

Drupal now has Image CDN support. Enable it in your site by following the official gatsby-source-drupal documentation.

We updated our default Starter template gatsby-starter-default to contain references to documentation, tutorial, our monorepo examples folder, and more – and aligned its look-and-feel to that of our gatsby new/npm init gatsby experience. It shows you how to use TypeScript, Server Side Rendering, and Deferred Static Generation in your Gatsby application. 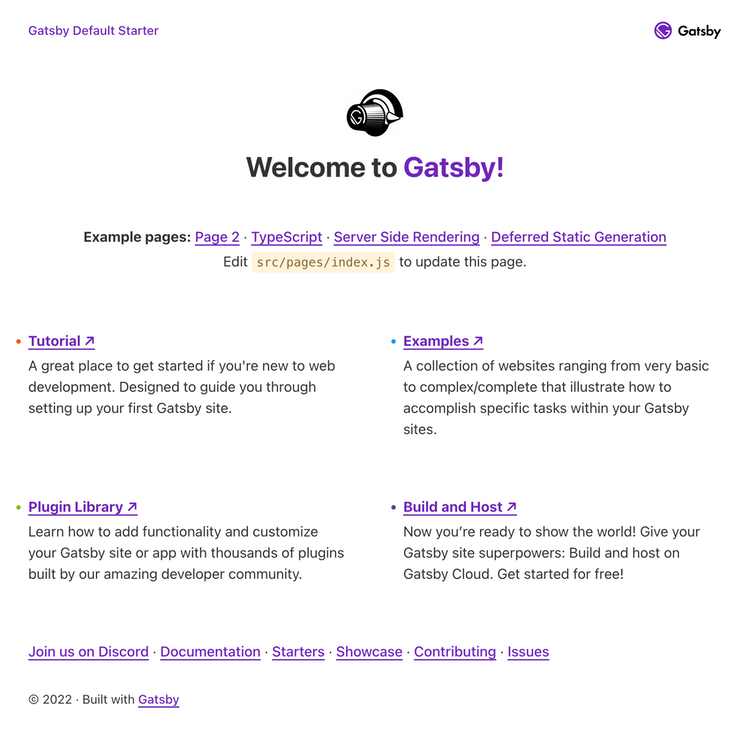