We’ve released Gatsby 3 in March 2021 and now have a lot of exciting new features for Gatsby 4! We’ve tried to make migration smooth. Please refer to the migration guide and let us know if you encounter any issues when migrating.

If you’re looking for an overview of all breaking changes and how to migrate, please see the migrating from v3 to v4 guide.

Prefer video over text? No problem! Learn more about all the new features (+ demo) and what we’ll work on beyond Gatsby 4 in the video below:

Query running is the portion of the Gatsby build process that happens after your site’s content has been sourced from the various content sources configured for your Gatsby site. This step is understandably one of the more expensive portions of the build process because it’s where all of the data is being extracted into the corresponding page data required to efficiently generate the actual website pages that your visitors interact with.

We’ve rearchitected the Gatsby data layer (not a trivial thing to do!) to allow page queries and static queries to occur in parallel, leading to a 40% reduction in build times for some sites! This innovation starts with allowing for parallel content queries, but positions Gatsby for a number of interesting use cases (imagine what you can do with a portable data layer 🤔).

How does it work?

The crux of the matter, regarding query running, is that Gatsby had historically utilized Redux as its internal, in-process data store. Now, our existing datastore is very fast because it’s an in-memory data store, but it carries a key limitation that was hindering our ability to substantially optimize the Gatsby build process: It’s only accessible via the current thread/process. This means that the Gatsby build process, and more specifically the query running portion of that process, could not be shared across CPU cores.

The team evaluated a collection of strategies for optimizing and decoupling the data layer in order to allow cross-cpu, and possibly cross-machine coordination of content queries and landed on the node.js implementation of LMDB: lmdb-store as the foundation for the architecture update. lmdb-store affords incredibly efficient data access, focused on fast read operations, which makes it suitable for the Gatsby user’s use case.

The Gatsby main process now coordinates content query workers with the now-shared data store. Therefore, you will now have n-1 query workers when building your Gatsby site, where n is the total number of CPU’s provisioned for your Gatsby Cloud (or other CI/CD host) site.

You can learn more about Parallel Query Running in the video below:

When a Gatsby site uses Deferred Static Generation, it means they are deferring or delaying the building of particular pages on their website until runtime. Once a delayed page is requested (visited) by a site visitor it will be built on the fly in the same manner as any Server-Side Rendered page, but it will now persist as a static build on the edge. So, for that first, and only first user on a deferred page – they will get the performance of any other SSR page, but each and every user after that will receive a completely statically generated page.

Due to the introduction of lmdb-store as the data store the generation of DSG pages happens with a snapshot of all the data at buildtime which means no APIs need to be requested on runtime and the data will be the same for everyone. Gatsby generates an engine internally that can build pages with the provided data, meaning that each of your deploys will be atomic as both page generation & data for each page is saved. Once you update your content, Incremental Builds only updates the necessary pages and updates the data store.

You can learn more about the different rendering options or read the How-To on using DSG.

Gatsby 4 now supports Server-Side Rendering, giving developers the choice of generating content at either build time, as with static-site generation, or at runtime. With Server-Side Rendering, teams can now run more effective A/B tests, personalize content, and more all while still using the Gatsby framework.

Server-Side Rendering is a method of content rendering in which each web page is served to a site visitor at runtime, meaning that a portion of the build process happens on each page request. Because the content is rendering during runtime, visitors will always get the latest version of content directly from the server — though they may have to wait a few seconds for it display.

You can learn more about the different rendering options or read the How-To on using SSR.

We are dropping support for Node 12 as a new underlying dependency (lmdb-store) is requiring >=14.15.0. See the main changes in Node 14 release notes.

With our new rendering options you now can have different kinds of pages in your project. We’ve added an output for gatsby build that tells you exactly which pages are SSG, DSG, SSR, or a Gatsby Function. 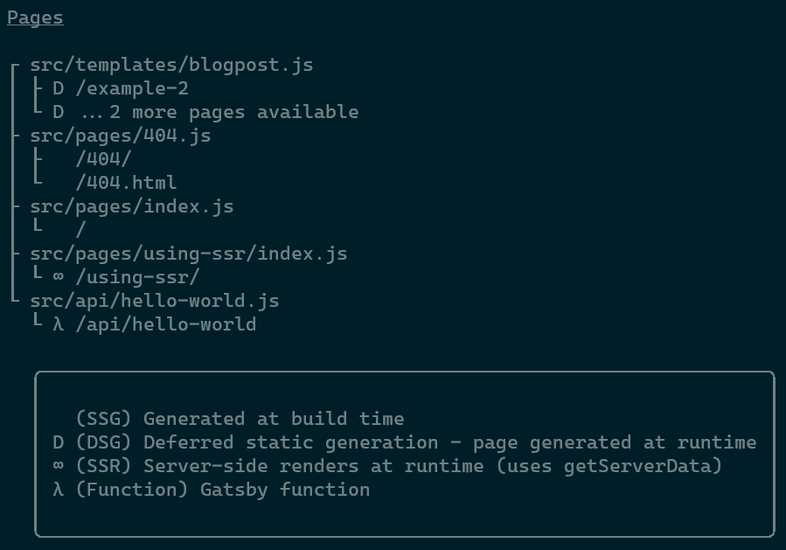