Part 4: Query for Data with GraphQL

Parts 4 and 5 of this Tutorial are all about data!

So far, you’ve been writing text and adding images directly in your React components. That’s an excellent way to build many websites! But often it’s easier to create and maintain data somewhere else - like a folder of Markdown files or a content management system (CMS) - and then pull it into your components as needed. That way, you can make updates to your content without affecting the code for your site.

Conveniently, Gatsby has a powerful feature called the data layer that you can use to pull data into your site from anywhere. Want to keep your blog posts in WordPress, your store products in Shopify, and your user data in Airtable? No problem! With Gatsby’s data layer, you can combine data from multiple sources, which lets you choose the best platform for each type of data.

Gatsby’s data layer is powered by a technology called GraphQL. GraphQL is a query language with a special syntax that lets you ask for the data you need inside a component.

In this Tutorial, we’ll teach you all the GraphQL you’ll need to know to build your first Gatsby site. Interested in learning more? How To GraphQL is a free tutorial that teaches you the fundamentals.

In this part of the Tutorial, you’ll learn about how to add data to Gatsby’s data layer and how to pull that data into your React components.

By the end of this part of the Tutorial, you will be able to:

If you’d rather follow along with a video, here’s a recording of a livestream that covers all the material for Part 4.

You can catch the stream live on Wednesdays at 10AM Pacific Time / 5PM UTC on the Gatsby Twitch channel.

Gatsby has its own GraphQL data layer where it keeps all the data for your site. But how does it work under the hood?

First, your data is stored in one or more sources. That source might be a folder on your computer’s filesystem, a content management system (CMS) like WordPress, or a database. You might even have multiple data sources! 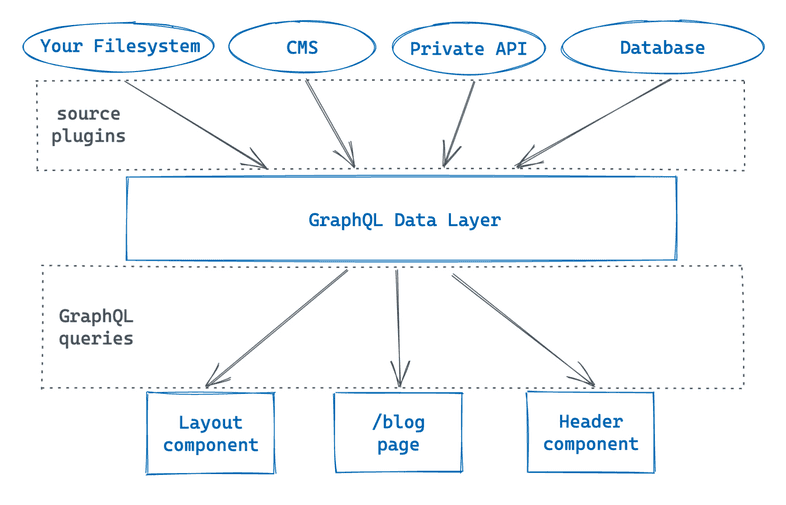 Use GraphiQL to explore the data layer and write GraphQL queries

How do you know what data is in your site’s GraphQL data layer? When you start the local development server for your site, Gatsby automatically creates a special endpoint that lets you use an in-browser tool called GraphiQL. With GraphiQL, you can explore your site’s data and build GraphQL queries.

Follow the steps below to open the GraphiQL interface:

GraphiQL is a helpful tool for testing out your GraphQL queries before you add them to your code. That way, you can make sure your queries always respond with the data you expect.

Try creating and running a few queries by doing the following:

In the next section, you’ll learn more about how to use specific fields. For now, take a minute or two to explore the different fields. What kinds of data are already available to you in the data layer?

Queries in building-block components: Pull the site title into the Layout component

Now that you’ve seen the general process for how data works in your Gatsby site, it’s time to try it out yourself.

The process for using GraphQL queries in your components looks slightly different depending on whether it’s a page component or a building-block component.

In this first section, you’ll start by pulling data into a building-block component. To do that, you’ll update your Layout component to pull in the title of your site.

Task: Use GraphiQL to build the query

Look in your gatsby-config.js file. There’s already some information there about your site, in the siteMetadata object.

This data was added to your gatsby-config.js file automatically when you used the gatsby new command in Part 1. It also gets pulled into the GraphQL data layer automatically, so you don’t need a source plugin for this first section.

Since you don’t need to set up a source plugin, you can jump straight into GraphiQL to build your GraphQL query:

You might have noticed that there are two different dropdowns for siteMetadata (and for every field under the site dropdown).

The first one (the purple one with a colon, siteMetadata:) is actually an argument attached to the site field. You can use the purple dropdowns to filter which pieces of data from the data layer get returned in the response. (You’ll see an example of this later on.)

The second one (the blue one without a colon, siteMetadata) is what you’ll use more frequently. This one adds the actual siteMetadata field to your query, which tells GraphQL to include that field in your response data.

Try toggling each of the dropdowns in the Explorer and see how the query in the Query Editor pane changes. What differences do you notice?

Try changing the value of the title property in your gatsby-config.js file. When you save the file, your site should rebuild, and when it’s finished you can re-run the query in GraphiQL and see your updated data.

Task: Use useStaticQuery to pull the site title into the Layout component

Now that you have a GraphQL query that returns the data you’re looking for, how do you use that query in your React components?

To pull data into a building-block component, you’ll use a pre-defined function from Gatsby called useStaticQuery.

Follow the steps below to use useStaticQuery to pull in the site title from your site metadata into your Layout component.

Note: By default, the query you build in GraphiQL will have a query name, like MyQuery. You may see an error if you have more than one query with the same name, so after you copy your query over from GraphiQL to your component, delete the name (as in the code example below).

So if your GraphiQL Result Window showed this:

then your data variable will have the following structure: 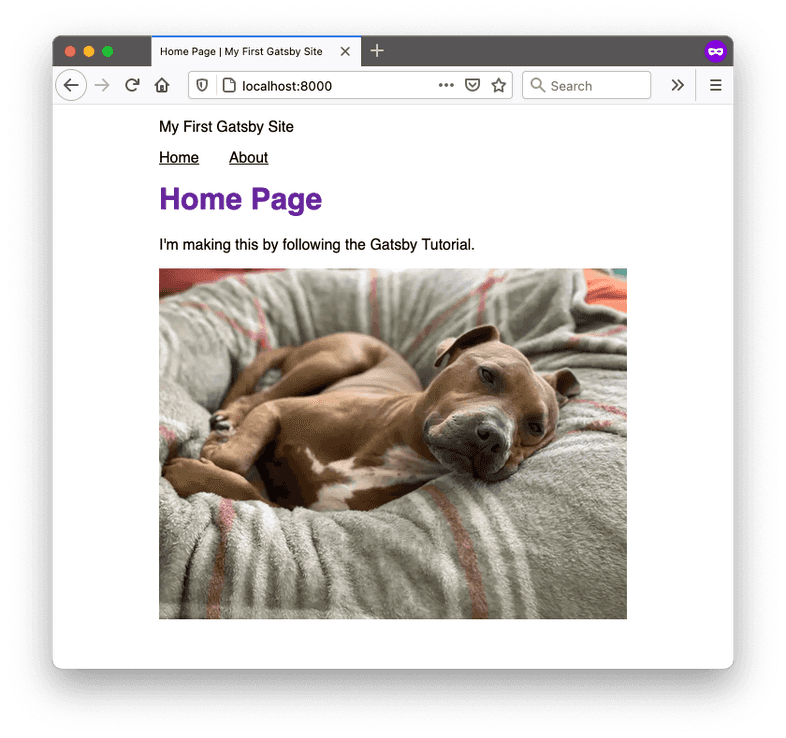 When your browser reloads, you should see your new styles applied to your site title. 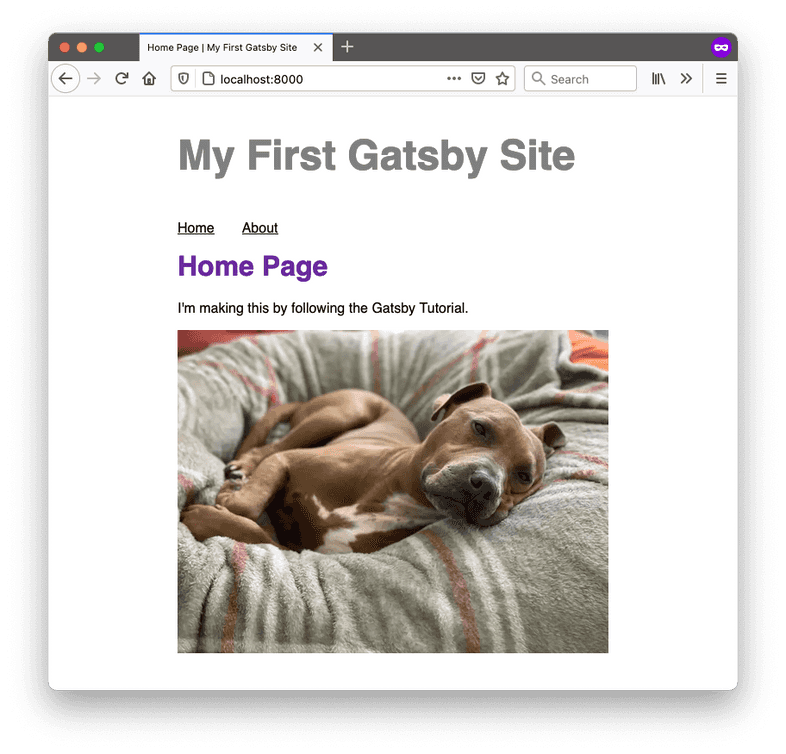 Congratulations, you’ve just used GraphQL to pull data into your site! Try changing the site title in your gatsby-config.js file and see your site update in the browser.

So far, your site has a few static landing pages: the Home page and the About page. The next step is to build out the actual blog page!

Eventually, your blog page will link to separate pages for each of your posts. But there’s a lot to learn to achieve that, so you’ll be working up to that goal over the next few parts of the Tutorial (Parts 4, 5, and 6).

In this part, you’ll create a blog page that lists the filenames for your posts.

Start by setting up the skeleton for your new blog page component. 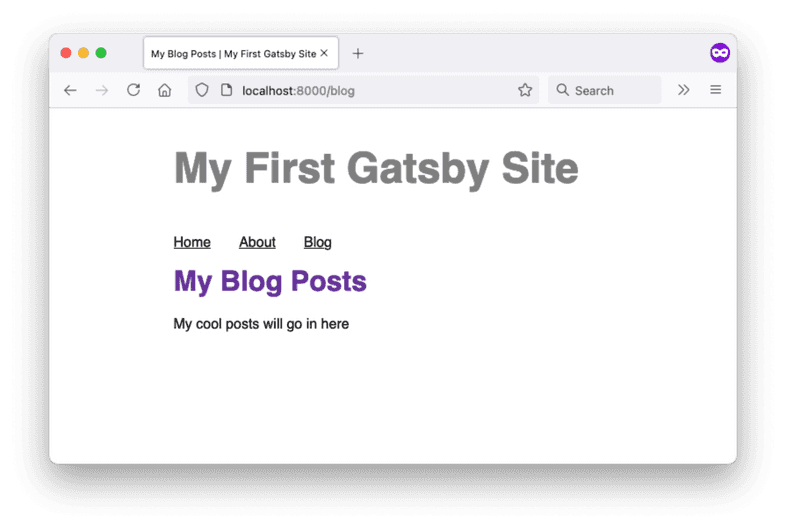 Now that you have a blog page, it’s time to create some blog posts! For your site, you’ll store each blog post as a separate file inside of a folder in your project. 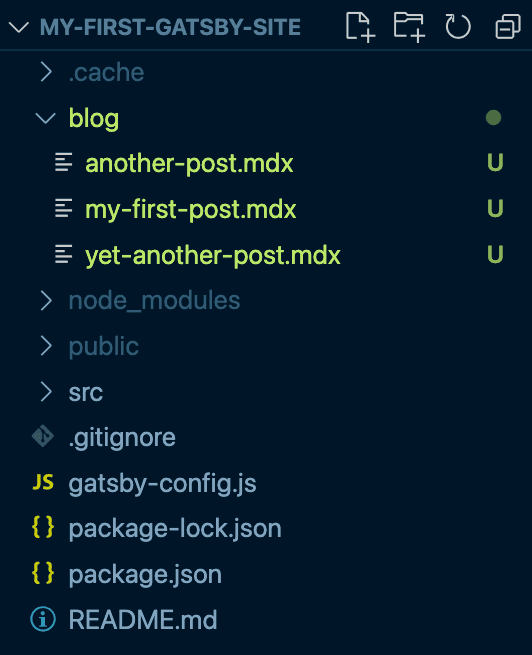 Task: Use GraphiQL to build the query

Now that you have some posts saved to your local filesystem, it’s time to pull those files into the Gatsby data layer. To do that, you’ll use a plugin called gatsby-source-filesystem.

Note: Remember the process for adding a plugin to your site from Part 3? The first step was to install the plugin.

If you’ve been following along from the beginning, you should already have installed gatsby-source-filesystem in Part 3 (because you needed it for adding static images with gatsby-plugin-image).

Otherwise, you can install the plugin by running the following command from the command line:

A closer look at the configuration options:

When your site builds, gatsby-source-filesystem adds all the files in the folder specified by the path option to the data layer. (__dirname is a variable from Node.js that stores the absolute path for the directory that contains the file currently being run.)

The name option in the configuration object gets set to the sourceInstanceName field for each file. This comes in handy when you want to source files from multiple folders. By giving each folder a different name option, you can build GraphQL queries that filter down to only a particular folder.

Now that you’ve built a GraphQL query that returns a list of your post filenames, it’s time to render that data in your blog page!

Note: By default, the query you build in GraphiQL will have a query name, like MyQuery. You may see an error if you have more than one query with the same name, so after you copy your query over from GraphiQL to your component, delete the name (as in the code example below).

Alternatively, you can give each of your queries a unique name. Query names can be useful for debugging errors that show up in your console when Gatsby executes your queries at build time.

Syntax Hint: In JavaScript, arrays have a built-in .map() method, which you can use to iterate over the elements in the array.

.map() takes in a function, which it runs on each element in the array. In the code block below, you’re using .map() to loop over each of the nodes in data.allFile.nodes and return a React element that wraps the node’s name in an <li> element.

In React, when you use the .map() method to render a list of elements, you should give each element in the list a unique key prop. This helps React keep track of what values have changed and need to be rerendered. For more on rendering lists in React, check out the React Docs: Lists and Keys. 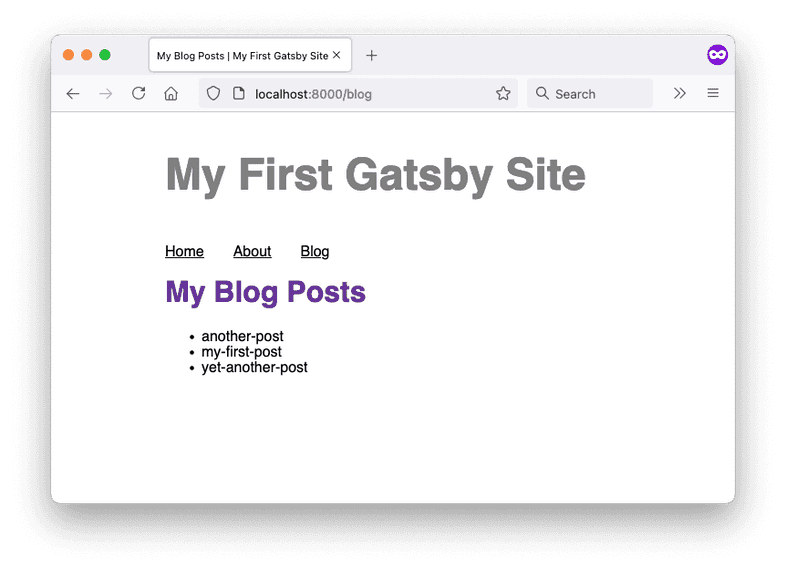 You won’t be able to render the contents of your posts just yet, since your site doesn’t know how to process MDX. You’ll fix that in the next part of the Tutorial!

Want to see how it all fits together? Check out the commit history in the GitHub repo for the finished example site.

Take a moment to think back on what you’ve learned so far. Challenge yourself to answer the following questions from memory:

Before you move on, deploy your changes to your live site on Gatsby Cloud so that you can share your progress!

First, run the following commands in a terminal to push your changes to your GitHub repository. (Make sure you’re in the top-level directory for your Gatsby site!)

Once your changes have been pushed to GitHub, Gatsby Cloud should notice the update and rebuild and deploy the latest version of your site. (It may take a few minutes for your changes to be reflected on the live site. Watch your build’s progress from your Gatsby Cloud dashboard.)

Our goal is for this Tutorial to be helpful and easy to follow. We’d love to hear your feedback about what you liked or didn’t like about this part of the Tutorial.

Use the “Was this doc helpful to you?” form at the bottom of this page to let us know what worked well and what we can improve.

In Part 5, you’ll add some content to your blog posts using a special format called MDX. You’ll also learn about transformer plugins, which you can use to convert data in your data layer from one type to another.

Continue to Part 5
Edit this page on GitHub